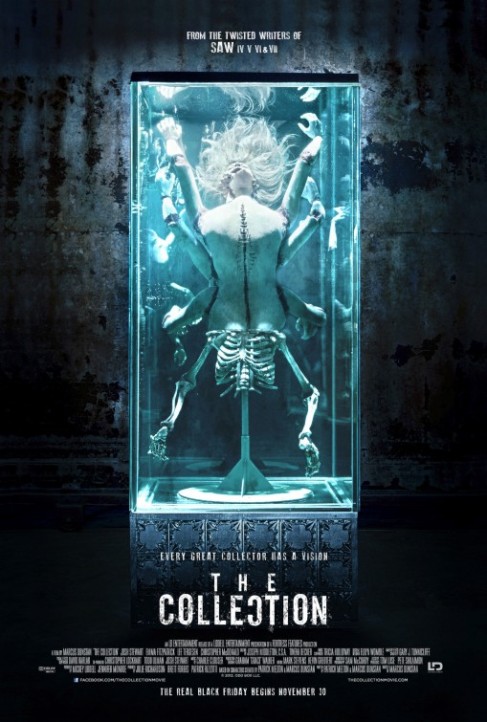 My local theater likes to poll people as they leave their movie. They hand you a checklist and ask whether or not you enjoyed your film, among other things. As I left The Collection, I overheard an indignant middle aged man proclaiming to the heavens as though daring someone to disagree with him, that it was unequivocally the worst movie he had ever seen. The way in which he expressed his disgust with the film implied that anyone who did enjoy it was essentially uncultured swine. If that man’s condemnation is to be taken seriously, then throw me in the pen and pour me some slops because The Collection was the dog’s bollocks, as the English might say.

Carrying on the glorious tradition of 1970’s grindhouse cinema, The Collection, directed by Marcus Dunstan and starring a bunch of people you’ve probably never heard of, picks up after the events of The Collector, released in 2009. At its heart, The Collection is a fun, visceral example of 21st century exploitation, which fans of the Saw franchise will appreciate, and no doubt find familiar, as Dunstan also had a hand in Saws  IV through VI as well as Saw 3D.

Buckets of blood and inventive death traps provide the main attraction, while more cerebral viewers might enjoy using their imagination to piece together the antagonist’s backstory. I’m the kind of person who enjoys the occasional ambiguous plot element, such as the savage zombie-things in the basement and the origins thereof. Spoiler alert, by the way: there are savage zombie-things in the basement. The unexplained aspects kind of accentuate the fact that the antagonist (I would call him ‘The Collector’, but since that’s the name of a completely different film, things might get confusing) is a man we know nothing about and whose brutality undoubtedly exceeds what we observe in the film.

The cast does the best it can with the material it’s given, but you don’t go to an exploitation film to see an Oscar-worthy performance, so adjust your expectations accordingly. The same principal applies to the cinematography, and that’s certainly not to say that either are bad or jarringly flawed, it’s just that they’re both kind of white noise in the background, so to speak. Let me give you an example. At the end of the film when the credits rolled, I tried to guess the names of the characters (as the actor’s name appeared first) and frankly, I couldn’t remember the name of a single one. The fact that they were all about as shallow as a teaspoon and just as emotionally complex probably had something to do with that too, but in reality all of these people were, as Lana Del Rey might assert, just born to die anyway.

You may notice that this review is slightly shorter than normal, and that’s because there’s really not much else to the film. It’s really just an enjoyable splatter fest that slings its gore with the best of ‘em. At the end of the day, I suppose The Collector caters to a specific audience and isn’t for everyone. If you’re like me and thought that House of 1000 Corpses and Hobo With a Shotgun were cinematic joyrides, then you’ll likely enjoy this one as well. If you’re like that old man in the theater, however, and haven’t had a day of fun in your life, then you might wan’t to give The Collector a pass. I enjoyed it though, and if you’re willing to indulge the vile and twisted part of you for an hour and a half, then so might you.

6 thoughts on “The Collection Review”