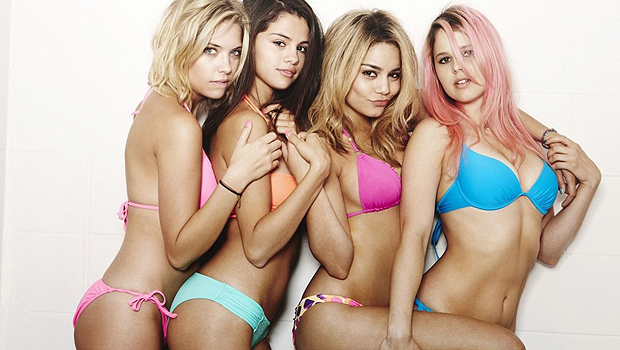 In spite of Andrew’s raw, feral hatred of this film, I’ve decided to go a little more in-depth in regards to the philosophy and psychology behind Spring Breakers. I realize that the film had niche appeal to begin with, and I also realize that there are some very legitimate reasons for not liking it. Nevertheless, let me cater to those rare few who, like myself, sincerely enjoyed the film, with this brief examination of some of the more understated aspects of character phycology.

In his book Authentic Happiness, one of the founding fathers of Positive Psychology, Martin Seligman, proposes that a person’s happiness can be determined by the following factors: setpoint genetics, circumstances, and voluntary control.

Setpoint genetics refers to the concept of a portion of a person’s happiness being attributed to their genetic makeup. The general idea is that after an individual experiences certain emotional highs or lows, they will eventually return to an average level of happiness, or setpoint, which is inherent in the genetic makeup of an individual- that is to say, unchangeable.  Therefore, Seligman argues, generally optimistic people tent to have a slightly higher setpoint while generally pessimistic people tend to have a lower one. Furthermore, Seligman suggests that about 35 to 50 percent of a person’s overall happiness is influenced by setpoint genetics.

Circumstances, likewise, seems to play a role in a person’s overall happiness, albeit a significantly smaller one. The circumstances referred to here can range from living in the first world versus the third world, being born into a rich family or a poor family, having an illness versus being healthy, etc. Seligman believes that the importance of these factors is much smaller, at about 8 to 15 percent, in the grand scheme of one’s happiness.

Voluntary control is an interesting factor because it proves to be surprisingly important, being responsible for up to 40 percent of a person’s level of happiness. Seligman argues that things like positive affirmations, utilizing one’s strengths and character traits effectively, being mindful- that is to say, being present in the moment-to-moment activities, and feeling as thought one’s actions are purposeful are all examples of voluntary control of one’s emotions.

Now, in regards to Spring Breakers, I’m most interested in the first of these factors, setpoint genetics, and in a phenomenon knows as the ‘hedonistic treadmill’.

Let us say, for the sake of argument, that the protagonists of the film are devoid of any existential meaning, as I argued in my review. This would erase the possibility of being motivated by living a purposeful life and, as we apparently see in the film, the girls are motivated solely by the pursuit of physical pleasure, or hedonism. Hedonism, essentially the pursuit of pleasure, is a key component of ‘the pleasant life’, but, as Seligman says, that brand of ‘happiness’ is fleeting and does not contribute to a feeling of authentic well being and flourishing.

The girls, without a conception of authentic happiness, and perhaps no capacity for authentic happiness (they’re debatably psychopaths, remember) are left no other option but to pursue the pleasant life. As they pursue the fulfillment of their physical pleasure, they begin to experience an emotional high, which quickly returns to their respective setpoints. As this happens over and over again, they begin to get accustomed to this emotional high in a process called adaptation. To compensate for this adaptation, their expectations must keep growing and growing in a phenomenon known as the hedonistic treadmill. Essentially, once this process has started, and unless an internal, voluntary shift takes place, no amount of pleasure will ever be enough and each successive attempt to recapture that same emotional high will be met with futility.

Perhaps an argument against hedonism, Spring Breakers captures a portrait of a self destructive path, leading neither to fulfillment or authentic happiness. I believe that the story is made all the more tragic by the fact that the girls really believe that they’re going to find some kind of salvation or meaning, where, in reality, only desperation and destruction exist.