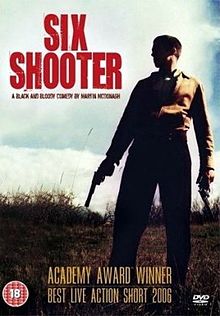 Hello, one and all. Today I bring you lovely people a short film called Six Shooter from the Irish master of dark comedy, Martin McDonagh. It tells the story of Donnelly, played by the incredible Brendan Gleeson, and his train ride to Dublin the day after learning of his wife’s tragic death. On the train he meets an amusing asshole of a kid, Rúaidhrí Conroy, who’s mother just died the previous day and two grieving parents who’ve just lost their infant to a cot death.

From here the film devolves into the usual incredibly dark yet hilarious tragedy that we’ve come to expect from a Martin McDonagh film. However, this movie in many way is about much more than a macabre train ride to Dublin. It’s about death and how we deal with it in a godless world. Donnelly, a man who’s just lost his wife, is completely at a loss as to how he should react to the death around him. Should he morn loudly and passionately like the young married couple do, or should he detach himself from it with cool humor like the boy does? It’s a difficult question to attack, but McDonagh does it with aplomb. He’s able to address the question with biting dark humor without losing the emotional connection to his characters and their central tragedy. This is in no small part due to the brilliant performances by both Brendan Gleeson, who will later co-star in In Bruges, and Rúaidhrí Conroy who bring a tremendous emotional current through out every minutes of the film. It’s really a beautiful film that achieves so much and acts as a great precursor to the incredible films McDonagh will later deliver. Please check it out above.