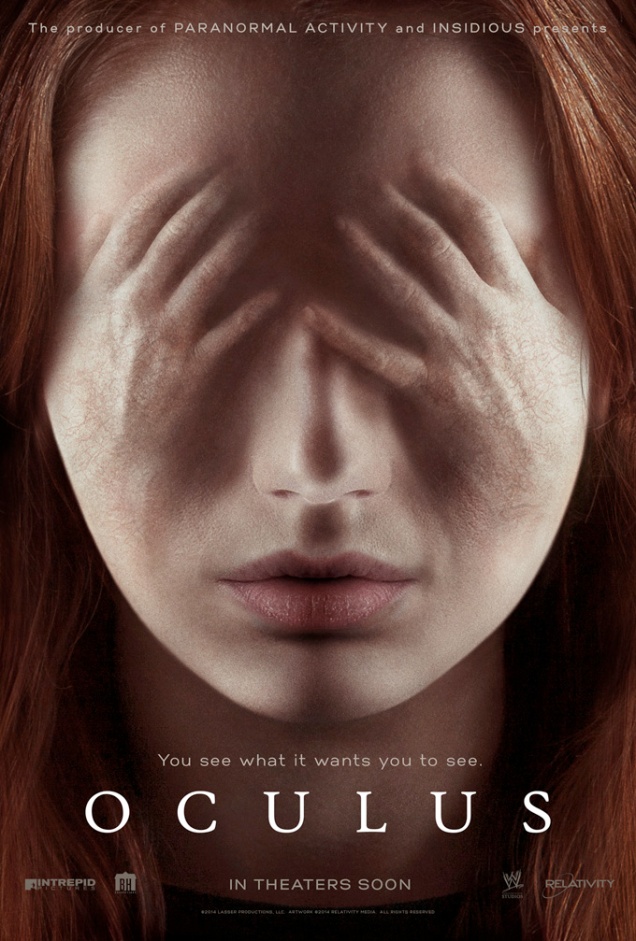 It looks like we’re in for a good amount of supernatural horror movies this year if Wikipedia is to be believed. Paranormal Activity: The Marked Ones led the pack, followed closely by Devil’s Due, and now Oculus has just bolted out of the gate as well. As so many films compete for a slice of the niche-audience pie, originality will surely be a make-or-break factor in the commercial success or failure of each title. Interestingly, Oculus is kind of an amalgamation of odds and ends from other movies, but proves to be a unique and engaging experience nonetheless.

Written and directed by Mike Flanagan, Oculus is based on a 2006 short film of the same name. Refreshingly, the film places an emphasis on a compelling narrative as opposed to jump scares, which is certainly more than I can say for most horror films these days. More impressive is Flanagan’s expert sense of pacing, as the tension and omnipresent sense of dread is nicely spaced out, leaving room for some welcome character development, adding emotional weight to the story. That being said, Oculus has pretensions towards being a true-blue horror flick, but its oppressive atmosphere and lack of gore seem to put it squarely in the territory of psychological thriller.

Karen Gillan, also slated to appear in the upcoming Guardians of the Galaxy, stars opposite Australian actor Brenton Thwaites as brother/sister duo Kaylie and Tim Russell, respectively. Oculus is nothing if not well cast, and Gillan’s Kaylie portrays the perfect, no-nonsense survivalist, reminiscent of Sharni Vinson’s Erin in last year’s slasher flick You’re Next. Gillian gives a powerhouse performance and the film seems to revolve around her obsessive psychosis as she tries desperately to take revenge on the demonic spirits that tormented her and her brother as children.

The film is cleverly split into two distinct yet inherently intertwined stories; that of Kaylie and Tim as children when they first encountered the supernatural entity living inside their parents’ recently acquired mirror, and the events of the present day, as the adult siblings try to expose the truth about the mirror and salvage the family name. The story slips subtly between the two timelines which adds a nice basting of tension to an otherwise exceedingly simple plot. This narrative technique, however, necessitates the viewer to pay close attention, especially towards the end of the film, as the timelines begin to shift back and forth at an alarming pace and occasionally the protagonists and their younger doppelgängers appear onscreen at the same time.

After an extremely strong first half, Oculus seems to peter out a bit by the third act. In fact, it almost seems as though the film can’t really think of anything else for the characters to do once they’ve (specifically Tim) accepted that the mirror in question is actually haunted. Case in point: one of the film’s most emotionally intense scenes eschews the supernatural completely and instead consists of Tim trying to convince Kaylie that she’s gone mad as a result of her desperate and unhealthy obsession with the mirror, and after they’ve both come to terms with it, things get really bland really fast. The fact that the film is so overwhelmingly proud of its signature ghostly apparitions certainly doesn’t help matters either. I’ve said it before and I’ll say it again: a mystery is always more frightening the less you see of it, and by the end of Oculus, those tantalizing ghosts and ghouls have taken center stage and lost all of their intrigue as they compete with the protagonists themselves for screen time.

My advice is to adjust your expectations before seeing Oculus. Admittedly, the trailer is a little misleading, but rest assured, the film stands up reasonably well as a thriller in it’s own right. While by no means a classic, Oculus remains a very solid film, and I can practically guarantee that it’s a more worthwhile experience that The Purge: Anarchy will turn out to be.