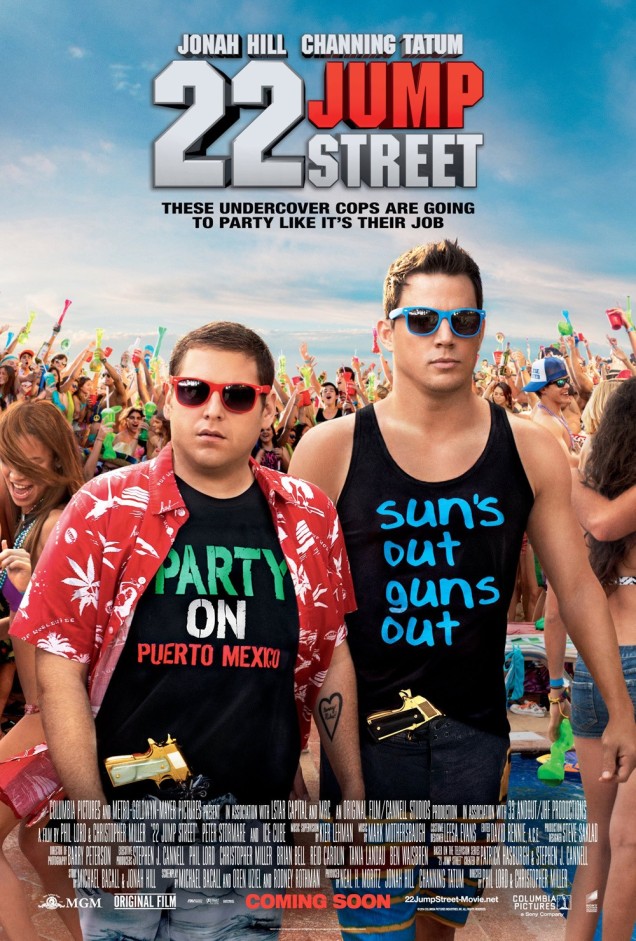 A lot of people were surprised back in 2012 when Phil Lord and Christopher Miller decided to bring the goofy premise of the 1987 television series 21 Jump Street to the big screen. Somehow, the duo managed to make the relatively obscure series a household name, due in large part to the hitherto unknown and charming chemistry between Jonah Hill and Channing Tatum. A clever script and some fairly consistent humor buoyed the film’s popularity and set the stage for this year’s sequel that absolutely no one was asking for. Nevertheless, 22 Jump Street, thankfully seems to have more ambition than simply riding along on the success of the original.

Fresh from the Earth-shaking and unprecedented success of The Lego Movie, directing team Phil Lord and Christopher Miller take on this project with admirable enthusiasm, really endeavoring to make a sequel that deserves to exist alongside its predecessor. Tatum and Hill, of course, return as officers Jenko and Schmidt, giving the film its vitality. I know this is a bit of a bold claim, but after giving it some thought I’m just not sure that the Jump Street franchise could really work with anyone else. The way in which Tatum and Hill play off one another is utterly unique, and, try as I might, I just can’t come up with another action/comedy duo why might be able to bring something comparable to the table.

The main boast that 22 Jump Street has over other similar comedy sequels is its self-awareness. “Meta” really is the name of the game, with the running gag being the the “department” spending twice as much money on the investigation and expecting to get twice the results. Indeed, in a cameo appearance by Nick Offerman, Deputy Chief Hardy orders Jenko and Schmidt “just do exactly what you did last time. Everyone’s happy.”

While the self-awareness thing is refreshing up to a point, it’s easy to overdo it to the point where it starts to become eye-rollingly obnoxious. 22 Jump Street starts to straddle that line after a while, but, as i mentioned earlier, the fun and excitement of watching Tatum and Hill play off one another mostly works to keep things interesting. All things considered, the film isn’t quite as clever as it thinks it is, and the fourth-wall-breaking antics of the two leads are really the only things that elevate the film above your average, cash-in, committee-designed sequel. That’s not to say that it isn’t a funny a movie, or even a good comedy, because it is; but the fact of the matter is that while it certainly doesn’t stoop to the level of being written-off as a blatantly unnecessary sequel, it just isn’t as fun or creative as 21 Jump Street.

If you choose to catch a showing of 22 Jump Street, your degree of enjoyment will likely depend on your tolerance for the goofy yet heartwarming mishaps of Hollywood’s favorite man-children. At the end of the day, I’d say it’s probably worth the price of admission and it’s hands-down one of the best comedies to be released this year.

One thought on “22 Jump Street”