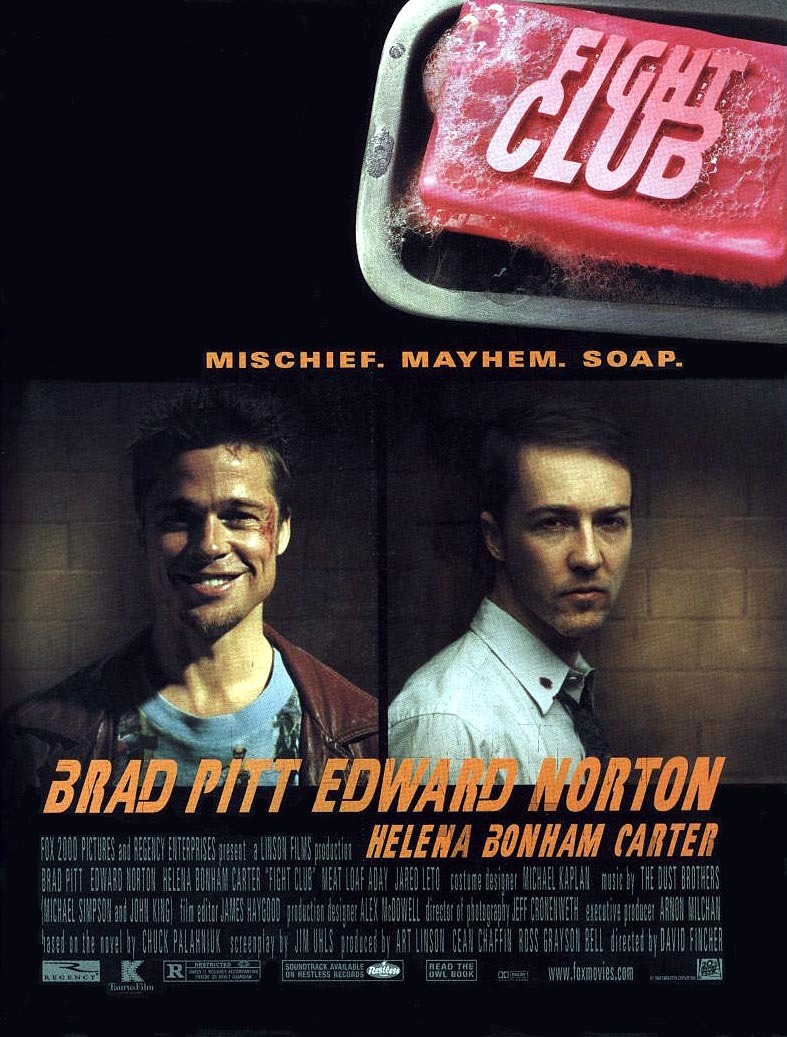 There are few questions more debated than the meaning of life. Ever since the inception of man people has been asking that simple and inexplicable question, and man has even come up with a number of answers. There is God, children, the afterlife, or any number of other answers to this ultimately unanswerable question. This movie, like those people before it, seeks to answer this same question. It attempts this by letting the audience enter the eyes of a man struggling with the very same problem they are. The narrator, Edward Norton’s character, proceeds through the film in multiple different iterations. There is the start of the movie where he is completely materialistic, there is the middle of the movie where he is enraptured by Tyler’s words, and then there is the end where he rejects Tyler’s philosophy and finally realizes there is no true meaning to life. These different stages of the narrator’s life represent the many answers to the meaning of life. The film uses these versions of his character to show and then reject these views of life.

The movie begins with the narrator debating on where to start the story. After much deliberation he decides the story must begin during his insomnia. He hasn’t been able to sleep for six months, and reality has been reduced to something akin to a dream. Work is like sleepwalking, and people have become nothing more than temporary inconveniences. There is no point to his life of sleepwalking, no point that is but his hoard of material possession. He has a coffee table in the shape of the yin yang symbol, a versatile dinning set, and even glass dishes with tiny bubbles and imperfections. These objects define him; they are the only things that make life worth living. This is the first meaning to life that Fight Club explores. The narrator believes that he can only become complete through the objects he owns. The people around him are worthless, as is every struggle in his life, so the only things that is of any real value are the material objects he owns. These things define him, they determine if he is successful or a failure. Everything else is useless and meaningless, so these objects end up controlling who he is. He has come to the point where the only thing that can get him off anymore is the Horchow Collection or any other catalog of commodity fetishism. He no longer has the ability to feel happy when he’s not buying another table or kitchen accessory. His values continue in this fashion until one day a gas leak causes his apartment to explode. Once he has lost all of his material possessions, he is left with a void inside of himself. There is nothing in his life to find meaning in. The things that had held all of his value and were his single reason for living are now gone. At this rock bottom state he was lead to Tyler Durden.

Tyler Durden is the driving force of the second philosophy of this film. After the destruction of the narrator’s apartment he calls Tyler and has a drink with him. At the bar the narrator tries to gain Tyler’s sympathy by describing all of the important things he has lost. Tyler responds to this with condescension and humor instead of the sympathy he was expecting. Instead of a tragedy he sees this as a chance to break free from consumerism’s grasp over the narrator. Tyler explains to the narrator that the objects he has invested in are meaningless and of little true consequence. This exchange marks the beginning of the narrator’s dalliance with Tyler’s philosophy. He has been swayed by Tyler’s words and they influence the narrator profoundly. His old consumerist ways have failed him and he has been left with nothing to believe in. To fill this gap he accepts Tyler’s ideas and throws away his old materialistic philosophy. He even goes as far as to move in with Tyler and start Fight Club. These new ideas take complete control of his life in the very much the same way materialism did. Where he was once working to make money and buy new things he is now involved in Fight Club and project mayhem. He has in many ways changed his entire view on life.

Tyler’s philosophy can be described a form of existentialism. He believes that life lacks any real meaning, and because of this people should live based on their own desires and try to improve their own world. In his mind it is very possible that “God hates you”, and it is man’s responsibility to rebel and fight the absurdity of life. Tyler thinks that by accepting the possibility that none of this matters and that life is absurd mankind can hit bottom and start anew. Project Mayhem is a great example of this. He wants to destroy the status quo of modern society by bombing all of the major financial buildings. By destroying the status quo Tyler is setting the world free from its corrupt and consumerist ways. Tyler believes that this will drive the world to restart and force people to take a look at society and reform. In one scene Tyler states that “self-improvement is masturbation.” By this he means that improving on a rotten core is futile and that the core should be scraped all together and replaced. This more than anything else is the defining idea in Tyler’s actions during the events of this film.

As the movie progresses the flaws of these ideas become more and more apparent. They are particularly noticeable during Bob’s death. In this scene the members of project mayhem are huddled around Bob’s corpse bickering over different methods of disposing of his corpse. The narrator tries to make them understand the tragedy of Bob’s death, but they can no longer understand. Through out the movie they transformed into nothing more than terrorists who bomb buildings, vandalizing other people’s property, and imposing their values on others. But, during this scene it is apparent that they have lost all individuality and have simply become tools for project mayhem. They have ironically lost their personal desires and have become nothing more than pawns. This kind of radical behavior starts to repel the narrator and makes him lash out at Tyler. The narrator’s discontent eventually manifests itself into a full on rejection of Tyler’s philosophies.

Over the course of this film the narrator has had his views on life continually crushed. First his materialism is quashed by the destruction of his apartment then Tyler goes out of control and alienates the narrator. These continues rejections lead to his third and final view on life, the idea that there is no meaning to life at all. The narrator finally realizes that prescribing any meaning to life is foolish and embraces nihilism. This idea is exemplified by his attempt at self-murder during the final scenes of the film. After Tyler becomes a malicious force, the narrator realizes that there is no reason to continue living any longer. He puts a gun in his mouth and pulls the trigger. By doing this he finally gives up on trying to find any meaning in life.

Fight Club at its core is a film about meaning. Through its narrator, who experiences three popular views on life, it explores its meaning. The narrator represents the everyman. He moves through life looking for some point. He asks the questions that every human asks and goes through a journey to find the answers he desires. There are multiple stages to his journey but ultimately he finds that there is no answer and learns to just give up.